Last night as news of the crackdown at Rachadamnern and Dok Wua spread, pictures of the dead were shown on the massive screen at the Rachaprasong rally, to gasps of horror and curses. The mood was both solemn and militant.

This morning I attended the Rachaprasong site and caught Arisman speaking from the stage. Families of those killed were asked to attend the Baan 111 Foundation (the foundation set up in the name of the 111 TRT executives banned from politics in 2007) to prepare court action, national and international against the Aphisit government.

The cars that had lined Ploenjit Road (occupying 4 lanes of 6) last night were mostly gone, and the numbers thinner than yesterday (quite reasonably)- it was a hot morning and numbers swell in the evening. People may have been deployed elsewhere.

I spoke to UDD spokesperson Sean Boonpracong. Some of what I report below comes from him, some from other sources.

The UDD sees the next 24 hours as crucial and the top leadership were in a planning meeting, with Veera as the brains and Arisman as the "best worst boy we have" as a smart tactician.

There are suggestions that some of the violence last night was military on military. Asked about the grenade that hit the military last night, I was informed by a UDD source that some 'watermelon soldiers' were deployed by rival commanders to attack the regiment was that was enforcing the crackdown. The source named the regiments and expected more conflict. This of course is unproven, but if true suggests that there may be more military action later.

I head back to Australia this afternoon so will not be posting on the rallies after this.
Posted by Sovereign Myth at 2:37 PM 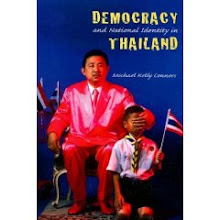 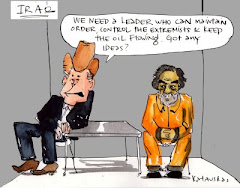 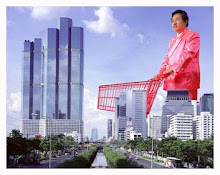